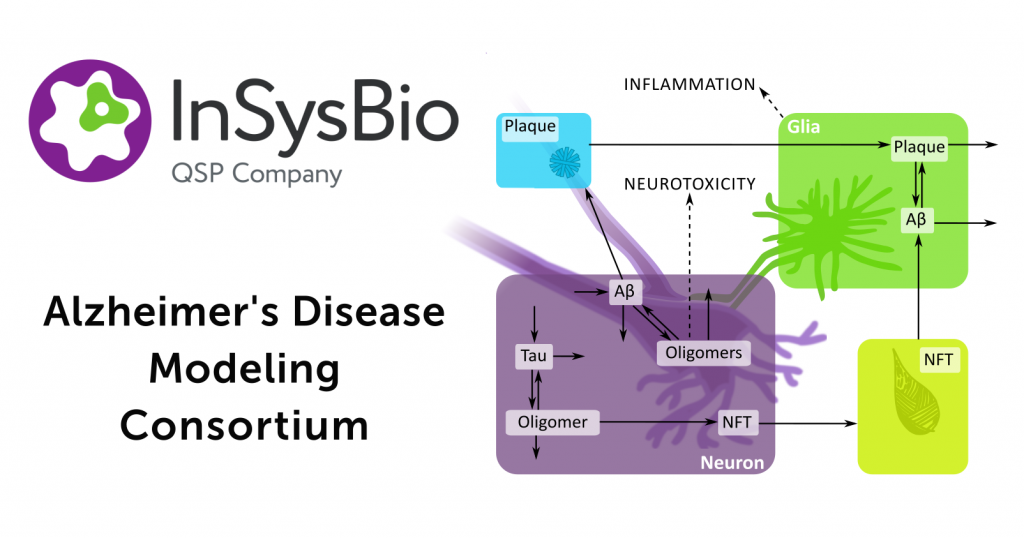 InSysBio, a pioneer in Quantitative Systems Pharmacology (QSP) modeling and simulation for drug development, today announced the launch of Alzheimer’s Disease (AD) Modeling Consortium. The aim of the consortium is the support of drug development in AD by consolidation of efforts of teams from various pharmaceutical companies in framework of development and application of AD QSP platform.

The focus of the initiative is to cover the main AD aspects related to tau and amyloid beta pathologies, bioenergetics, neuroinflammation and to reflect in the platform the points of interest of consortium members. The platform could be used as a tool to optimize particular clinical trials in AD and to predict whether combination of amyloid/tau targeted therapies with other targets (bioenergetics, inflammation) could yield significant benefit depending on the disease stage. The consortium is led by Dr. Tatiana Karelina, expert modeler and lead InSysBio specialist in AD research.

AD QSP platform will be based on InSysBio previous experience: developed in InSysBio QSP models cover amyloid and tau pathologies, and other aspects of AD. Translational amyloid beta model, model of amyloid aggregation, and model of tau phosphorylation were published in peer-reviewed journals.

“Our QSP models of amyloid and tau pathologies have already been successfully applied to support the development of particular drugs in AD in framework of collaborations with leading pharmaceutical companies. The disease complexity, its unclear nascence mechanisms and multiple failures of clinical trials are leading us to organization of the working group to consolidate all available knowledge in framework of QSP platform. Ability to integrate knowledge from in vitro data, scaling of the model from mouse to human are only few of the advantages of our QSP platform which is very useful in such disease as AD, as extensive biochemical in vivo data can hardly be obtained from the human brain,” said Tatiana Karelina, PhD, AD Modeling Consortium leader.

InSysBio is a Quantitative Systems Pharmacology (QSP) company located in Moscow, Russia (INSYSBIO LLC) and Edinburgh, UK (INSYSBIO UK LIMITED). InSysBio was founded in 2004 and has an extensive track record of helping pharmaceutical companies to make right decisions on the critical stages of drug research and development by application of QSP modeling. InSysBio’s innovative approach has already become a part of the drug development process implemented by our strategic partners: nowadays there are more than 100 completed projects in collaboration with leaders of pharmaceutical industry. The company has published multiple scientific studies in various therapeutic areas. InSysBio team is developing software and tools for QSP and continuously improves methods for biological modeling. For more information about InSysBio, its solutions and services, visit www.insysbio.com.