Specific lysis is a complex multi-step process of target cell death mediated by cytotoxic granules containing enzymes (perforins, granzymes) released by effector cells after engagement with a target. Indeed, the probability of target lysis should depend on the number of surrounding effector cells (i.e., effector to target ratio). Since the cell-cell interactions during target killing are discrete processes and an exact number of cell aggregates is unknown, a detailed description of cell lysis is complicated and contains plenty of parameters. This work aims to provide simple biologically relevant equations describing cell lysis dependence on both time and effector-target ratio.

Specific lysis may be considered as first-order process of target cell death after engagement with one or more effector cells due to release of cytotoxic proteins:

where [〖T:E〗_i ] is number of target cell aggregates with i effector cells and 〖k_kill〗_i is rate constant of specific lysis which also should be dependent on number of effector cells surrounding target. Since the cell-cell interactions during target killing are a discrete processes and exact number and size of certain cell aggregates is unknown, detailed description of cell aggregates formation based on the law of mass action is unable to provide simple model avoiding rough assumptions that may affect the simulation results. Thereby, an alternative approach is required to describe this process in simplified manner with minimal number of unknown parameters.

where i is the number of effector cells surrounding target cell; n is the maximal number of the possible cell-to-cell contacts (neighbors in this consideration); E and T is number of effector and target cells, respectively. Assuming that i effectors kill i-times faster than one effector cell we may write new expression for the specific lysis rate and make some algebraic rearrangements to obtain more compact form: 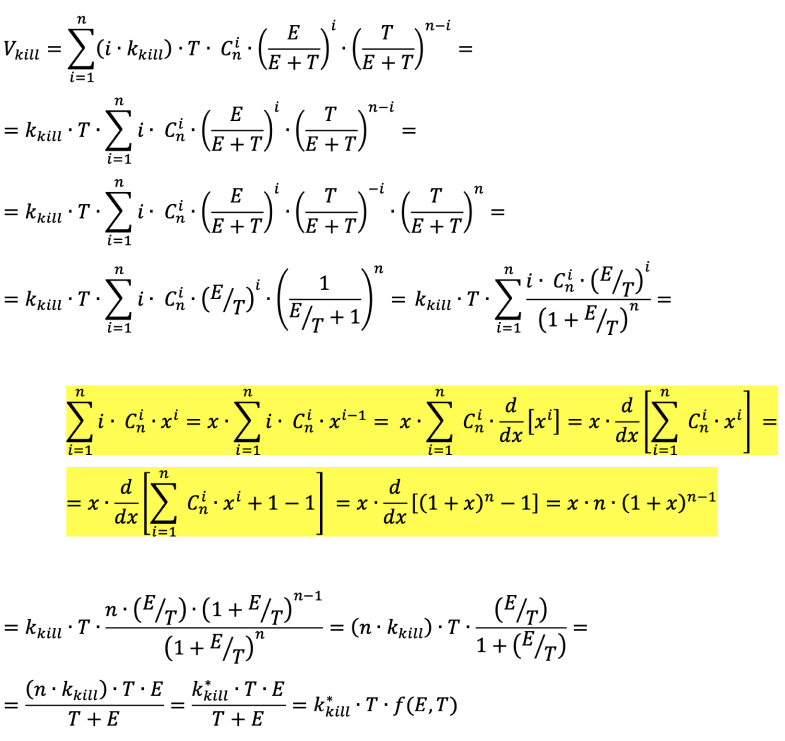 where the last term in final equation is referring to the influence of the effector-target ratio on the specific lysis which is usually observed in publications on in vitro experiments with cell- mediated cytotoxicity.

Specific lysis is a complex multi-step process of target cell death mediated by cytotoxic granules containing enzymes (perforins, granzymes, etc.) that released by effector cells after engagement with target. Clearly, that rate of target cell lysis should depend on activity of these enzymes:

is a maximal rate constant of specific lysis and

is an activity of enzymes which gave half-maximum rate of killing.

On the other hand, the activity of released enzymes relative to certain target cells should be proportional to the number of surrounding effector cells which actually corresponds to the effector-target ratio:

Hence, we got the explicit dependence on effector-target ratio and may explore some boundary behaviors of specific lysis rate as

tends to zero or to infinity:

Thus, the derived equation demonstrates saturation behavior at increasing concentration of both effector and target cells in accordance with experimental observations [PMID: 408421].

Equations for description of in vitro experiments

ODE for target cells dynamics in these experiments:

Specific lysis, by definition, is calculated on the basis of number of dead cells or concentration of substances released during cell death (dye, isotope, etc.) [PMID: 408421]:

where [test] dead cells in experimental sample, [sp] dead cells in sample without effectors, [max] maximal number of dead cells when all of them are lysed. Hence, substituting analytical solutions for target cells:

Hence, it is possible to estimate unknown parameters

1. If we have data in range of

2. If we have data in the certain range of

values (1) and (2) and express the ratio of corresponding

From this equation the

may be calculated at any other

Let’s analyze data from the study [PMID: 27454297– Fig. 5 B]. Authors assessed the cytolysis of target cells after 18 hours of incubation with CAR-T cells. Here, we have range of

ratios from 1 to high values. Applying formulas described above: 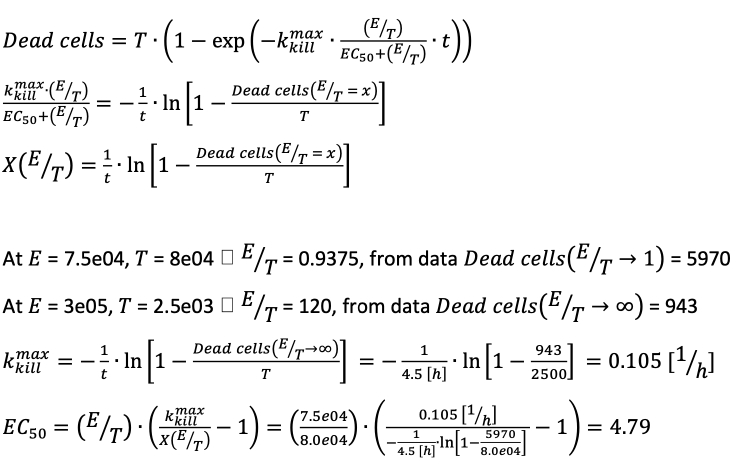 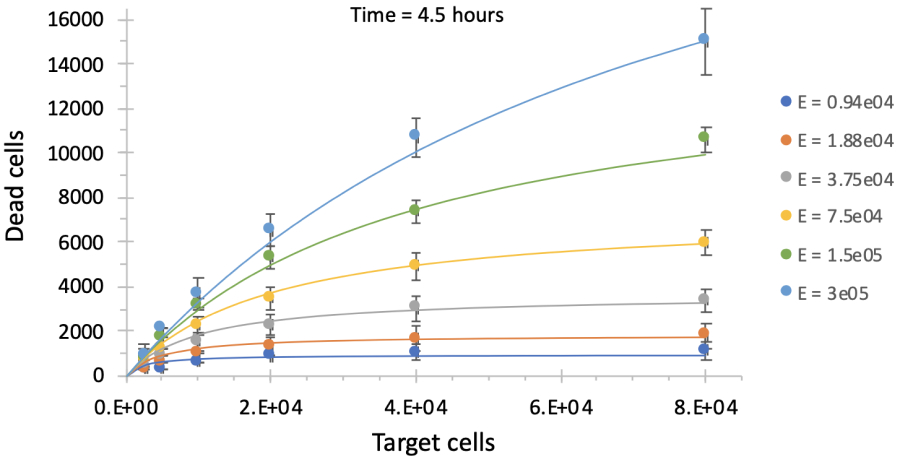 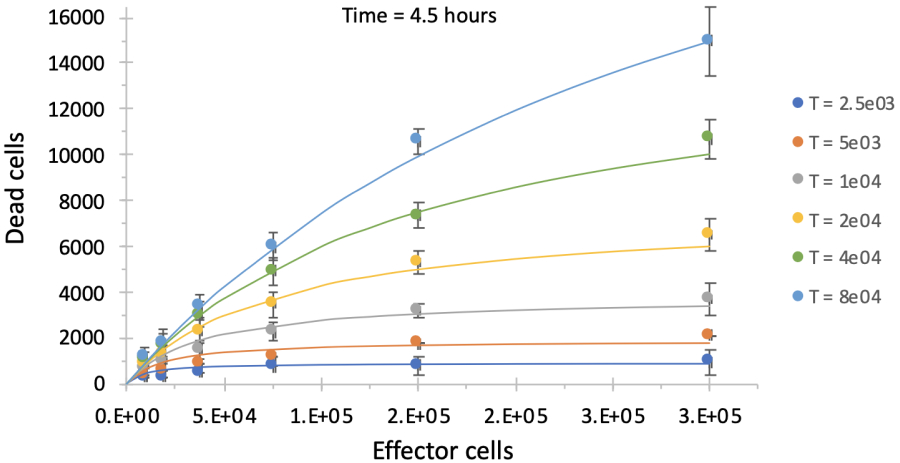 Also, explicit dependence on time was plotted against experimental data [PMID: 408421 – Fig. 1A]. For this data set 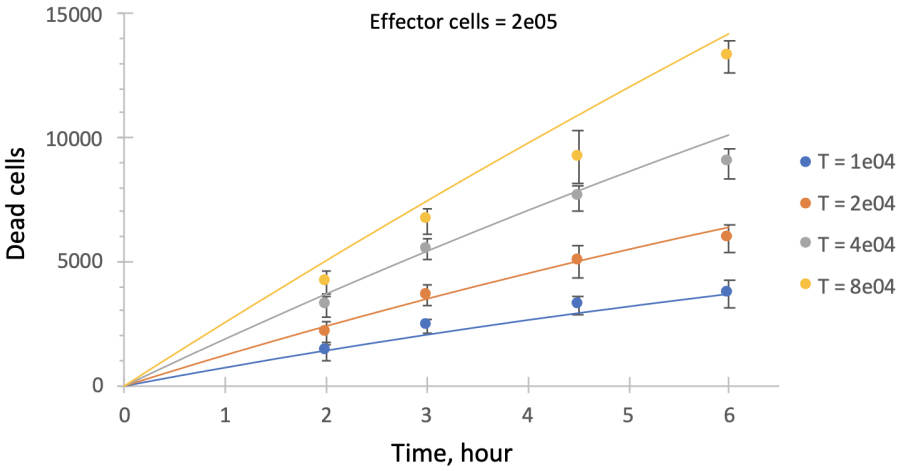 Let’s analyze data from the study [PMID: 29499048 – Fig. 2 C]. Authors assessed the kinetics of cytotoxicity depending on E:T ratio during incubation of target cells with NK cells. Here, we have the range of e/t ratios from 0.625 to 10 at two time points. 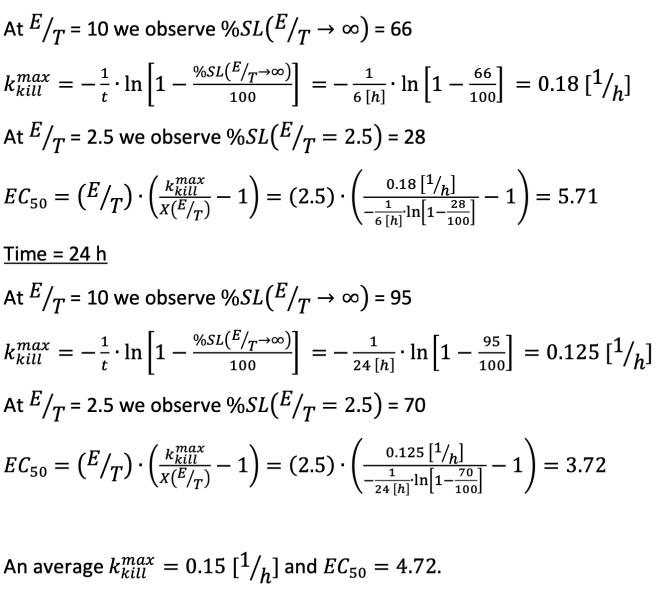 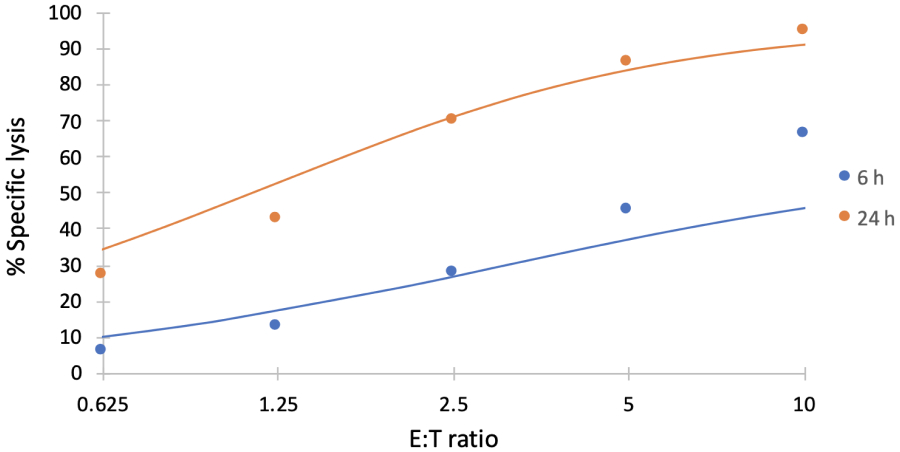 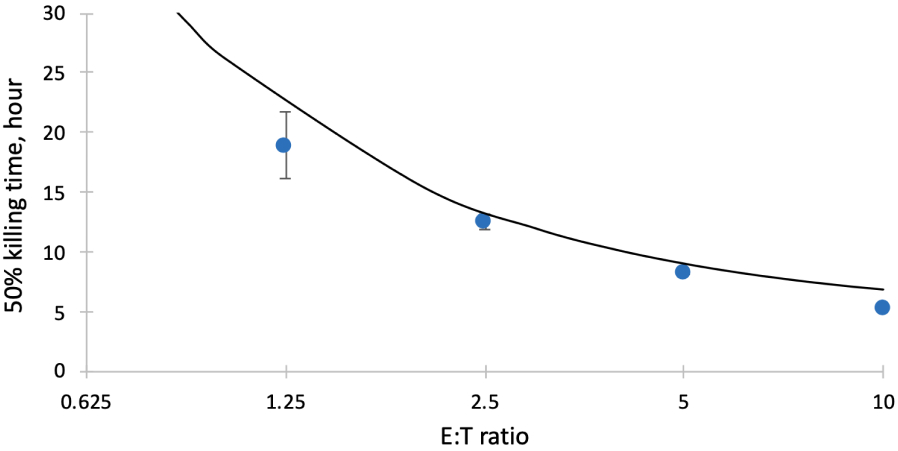